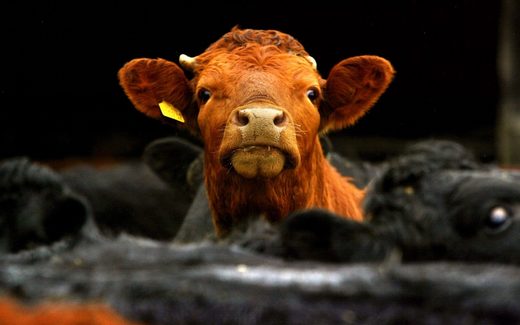 © David Cheskin/PA Archive
The key is to educate people about where their food comes from and to encourage responsible consumption of beef and dairy produced to the highest standards.

If students and staff at Goldsmiths University really want to help the environment, they should end their ban on selling beef on campus. Far from being the bogeymen portrayed by environmental campaigners, sustainably farmed beef and dairy cattle are integral to maintaining our green and pleasant land, keeping our waterways free of chemicals and feeding our population in the most efficient manner possible.

Two thirds of UK farmland is under grass and in most cases cannot be used for other crops. The only responsible way to convert this into food is to feed it to cattle, which are capable of deriving 100 per cent of their nutrition from grass and therefore are more efficient on such land than chickens or pigs. Even on grassland where crops could be grown, ploughing it up to create arable farms would release huge amounts of carbon into the atmosphere and require the use of pesticides, herbicides and fertiliser, all of which can devastate biodiversity.

Cattle farming does not just help to maintain grassland – it also works to improve the sustainability of existing cropland. During the “Green Revolution” after the Second World War, many farmers abandoned mixed farming and instead made the most of industrial chemicals, which enabled them to grow vast monocultures. They were undoubtedly right to do so, given the huge leaps in productivity that were made at a time when food supplies were tight. The world, though, is now beginning to count the cost of this advance.

In order to reverse the problems that have arisen from chemical-dependent crop monocultures, grass and livestock are having to be reintroduced as part of mixed arable systems. Grass is the great healer and, when grown with plants like clover, is the key to regenerative farming. Its extensive roots store atmospheric carbon deep within the soil, while its continual cover reduces chemical run-off, soil erosion and pollution. More farmers would do this if they could make decent profits from having cattle on their land. The upshot is that we don’t need to cut cow numbers to help the environment, we actually need more of them.

My final point in the case for cattle concerns ruminant emissions. Methane is indeed a major contributor to global warming, but ruminants have been around for a long time without causing problems. What’s more, because methane is a short‑lived gas, we only need to achieve modest reductions in emissions.

However, none of this is to say that all beef is equal. While free-range cattle are great for the environment, the same is not true of factory-farmed animals. These cows, which live enclosed in sheds, are typically fed on soya or cereals grown on intensively farmed land. This is deeply inefficient and contributes to deforestation. The key is to educate people about where their food comes from and to encourage responsible consumption of beef and dairy produced to the highest standards.

Mindlessly jumping on the “all beef is bad” bandwagon, as campaigners at Goldsmiths have done, is hugely counterproductive. Many of the pasture-fed cattle farmers I talk to are already struggling as a direct consequence of eco-vegetarianism – their businesses threatened by the very people who should be supporting them most.

Patrick Holden is CEO of the Sustainable Food Trust