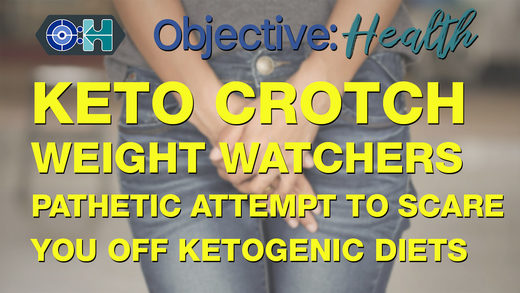 You know when you’re clipping along on the ketogenic diet, losing weight, healing your autoimmune symptoms, experiencing clearer thinking, curing your cancer and clearing your skin issues, but you notice a certain stink coming from your nether regions? Yeah, neither do we.

All across the internet in the last few weeks, mainstream media headlines decried a new side effect of the ketogenic diet, dubbed ‘Keto Crotch’. Anyone who’s ever done the ketogenic diet knows this isn’t a thing, but it didn’t stop the story from spreading far and wide. This represents yet another smear in a long line of disinformation programs against the ketogenic diet. But digging deep on the story’s origins brings some disturbing revelations about how corporate interests are able to invent myths to control public behavior, getting viral hits and embedding views into the collective consciousness that have nothing to do with reality.

Weight Watchers, Coca-Cola, Kellogg’s, Barilla – all have many things in common (including selling products diametrically opposed to the ketogenic diet). They all employ mega-PR firm Edelman Digital. Coincidence? Join us as we dig in to the nature of the Keto Crotch phenomenon and how corporate interests shape ‘reality’ to control the behavior of the masses.

And stay tuned for Zoya’s Pet Health Segment, where she looks at the amazing healing effects of the ketogenic diet – for dogs!