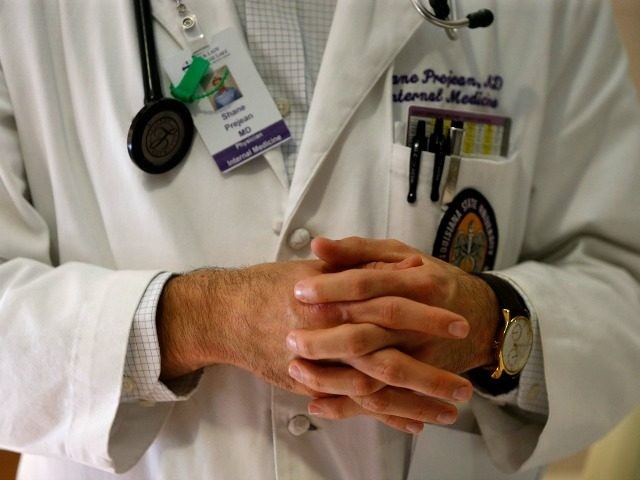 As the restrictions put in place by the federal and state government to prevent the spread of the coronavirus morph from weeks to months, physicians said on a conference call with reporters on Tuesday that the real threat to Americans is the lack of access to health care.

It’s fear, not the virus, that is leading to dangerous and deadly health outcomes, from children falling behind on routine vaccines to people with serious conditions like heart disease and depression staying at home instead of seeking help.

“I just feel that’s there’s a very big disconnect between what the average American thinks is going on and what’s actually going on,” Dr. Simone Gold, an emergency room physician, said on the call.

Gold told reporters about a middle-aged woman she met in the emergency room who had fallen while attempting to color her own hair because she couldn’t go to a salon.

The woman had a broken hip and shoulder and required surgery.

Dr. Mark McDonald, a psychiatrist who specializes in child and adolescent psychiatry, said on the call that for the first time in his ten years of praticing, he lost a patient. The woman, who suffered from depression and had struggled with drug addiction, died at home alone of an opioid overdose.

“I am certain that the cause of her death was due to a withdrawal of support in the community, and the withdrawal of her ability to be in school, her inability to [deal with] the added stress,” McDonald said.

And fear of dying from the virus is being fomented by the media, the physicians said.

“All you have to do is watch the six o’clock news here in L.A. to know why they are avoiding the health care system,” Dr. Steven Giannotta, the chairman of neurosurgery at the University of Southern Californian, said on the call. “Because we’ve allowed the media … to stigmatize COVID positivity.” He went on to say:

But, in fact, it is far more dangerous to stay at home if you have a serious health condition that needs regular treatment, Giannotta said.

Dr. Robert Hamilton, a pediatrician in California, said on the call that the lockdown is also hurting young people who are missing out on social time with friends and classroom structure as schools continue to be shuttered.

Hamilton said that the Los Angeles Times reported that online learning is not replacing either experiences and that 15,000 students have disappeared as it related to being in touch with teachers online and some 40,000 students have failed to check in daily.

Hamilton warned about “the emotional and social toll that this is taking on children being in lockdown for this period of time.”

“Issues of depression, suicide, stress, that sense of futility, despair, fear, and paranoia really, are taking hold in our young people,” Hamilton said.

Moreover, the doctors agree that while the initial lockdown for a couple weeks or so to make sure that hospitals and the health care infrastructure was prepared for a surge of the coronavirus was wise, the ongoing restrictions are not only not helping stop the spread of the disease but are delaying the inevitable course of this and many other viruses.

“The reality of herd immunity is obviously we don’t know until we know,” Dr. Jeffrey Barke, co-founder of the Person Care Physicians in Newport Beach, California, said. “But we have examples of past respiratory viral infections where we’ve been able to reach a level of herd immunity to protect the most vulnerable.”

“For every child and for every young adult that is locked indoors and is not allowed to be exposed to the virus when they overwhelming do well, especially if you are under the age of 40 or even 50, that’s one person less to achieve that level of herd immunity,” Barke said. He continued:

Even if we don’t get up to the recommended 60, 70 or 80 percent of immunity within the population – even it we only reach 30 or 40 percent – that’s 30 or 40 percent of Americans that are exposed, that are immune and that are no longer able to spread the virus and are able, in some regard, to protect the most vulnerable.

So the reality is that we are way past the time where being locked down makes any scientific or medical sense. We are taking the healthiest folks – the youngest, the strongest, our children – and we are in effect protecting the healthiest herd from being exposed and allowing them to get herd immunity.

So this idea that somehow we have to wait for a vaccination or a cure to this virus in order to open up schools just makes no scientific sense whatever.

“in my view, this is a pandemic of hysteria and emotional overload,” McDonald said. “Beyond a medical pandemic.”

The conference call, which was hosted by the Tea Party Patriots Action, was also held to announce the launch of a website to educate the public and also to announce that more than 500 doctors have signed a letter delivered to President Donald Trump to share their concerns.

“There are more than one miliion licensed physicians in this country,” the website states. “Do you really believe there is only one opinion? Thousands of physicians have something to tell you.”

The A Doctor A Day website will feature daily stories from doctors across the country.

The letter to Trump, after thanking the president for his leadership during the health crisis, was crafted to “express our alarm over the exponentially growing negative health consequences of the national shutdown.”