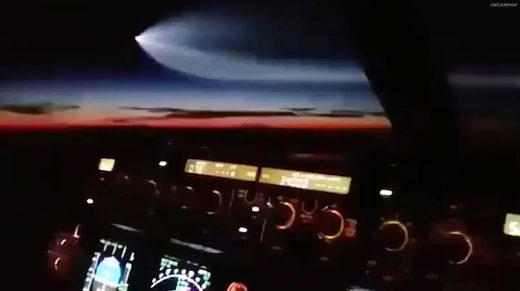 Missile… or something else?

The crew of a passenger plane traveling to Mexico got a rare opportunity to witness a test-launch of a Trident nuclear missile as it flew over the Pacific Ocean. Unaware of what it was, they filmed the dramatic sight.

A beautiful streak of light that exploded outward into a wide beam of white light turned out to be a Trident missile. In the footage, the crew can be heard saying ‘Wow,’ as they look out at the shooting star beside their Airbus liner.

The video published by The Drive was shot from a plane flying from Guadalajara to Tijuana sometime in early September. It clearly shows two-stage separations as the missile launched from the Ohio-class submarine USS ‘Nebraska’ skips through the sky westward.

Defense experts told The Drive that the trajectory of the Trident appeared unusually flat, possibly indicating a test of the missile’s ability to deliver the W76-2 warhead.
A derivative of the standard W76-1, it has dramatically lower yield and consequently a smaller weight. A lighter payload allows the delivery vehicle to be fired at a depressed trajectory, which sacrifices range for the sake of faster travel time and better survivability against enemy anti-ballistic missile measures.

The filmed test was one of a series conducted between September 4 and September 6.

Trident test-fires are usually solitary launches, and are sometimes fired in pairs. But four in quick succession?

And why did the Navy press release give a vague date range and landing on this occasion? They usually specify when and where a missile was launched and came down.

Also, whoever sent that video to The Drive didn’t include the time/date on which the pilots flew.

As the Drive article points out:

We don’t know the distance of the aircraft to the missile, and of course, the aircraft’s altitude and range from the missile is going to make a difference as to where it appears in the sky from the aircrew’s perspective, but this looks too flat even taking those factors into account.

Now, we’ve reported on this kind of sighting many times over the last two decades, and they’re typically connected with test-launches of missiles. What often happens though is that a missile launch is associated with the sighting/footage after the fact, and often very clumsily at that.

The RT article above says the video “clearly shows two-stage separation” of a missile, but there’s nothing clear about it. The thing is, that ‘separation’ feature has been observed in similar videos that have been taken of objects that could not be tied down to a nearby missile launch.

What we’re getting at is that these pilots may have witnessed something coming into the atmosphere, at a ‘flat’ angle, not leaving it…

For more on the similarities of missile and comet/meteor trails, check out:

Reading Celestial Intentions Through the Wrong End of the Telescope: Missiles, UFOs and the Cold War