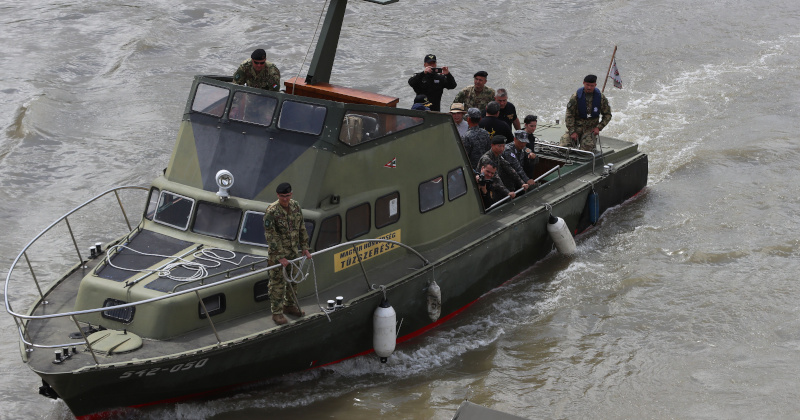 Hungarian military boats are now patrolling the river border with Serbia as illegal migration pressure increases on the Balkan Peninsula, according to reports.

Officers say they are now encountering migrants and human traffickers in and around the Tisza River on a daily basis.

“If they come in groups, they always have leaders. They have excellent equipment. We found night-vision goggles, and even a ground sensor,” Hungary’s Deputy Minister of Defense, Szilárd Németh, told EuroNews.

“Fence cutters, spades, maps, lists of addresses, taxi numbers — they have them all. They are very well prepared to cross the border of Hungary.”

Németh says Hungary is “under siege,” as the number of illegal crossings has dramatically increased in recent months.

Just days ago, Hungarian border authorities thwarted a coordinated blitz by as many as 70 migrants who successfully climbed over a vulnerable sector of fencing, only to be driven back by alarms and warning shots fired by armed agents.

“The Serbian-Hungarian border is under severe pressure, with more than 3,400 people having tried to enter Hungary illegally in January alone,” Bakondi continued. “Illegal groups are still gathering now; this one was a blatantly aggressive and violent group.”

Hungary recently announced it would be doubling the number of soldiers deployed to defend the country’s borders, with officials warning over 100,000 migrants have gathered on the Balkan Peninsula and are threatening to flood Europe in a new crisis potentially rivaling 2015.

‘Pandemic: How to Prevent an Outbreak’ is the latest piece of predictive programming brought to you by Bill Gates. Alex Jones breaks down Gates’s involvement in this production and how he is using his tax-free billions to advance the globalist depopulation agenda.

By the way, people who know what’s coming are taking advantage of our healthy & delicious storable food!