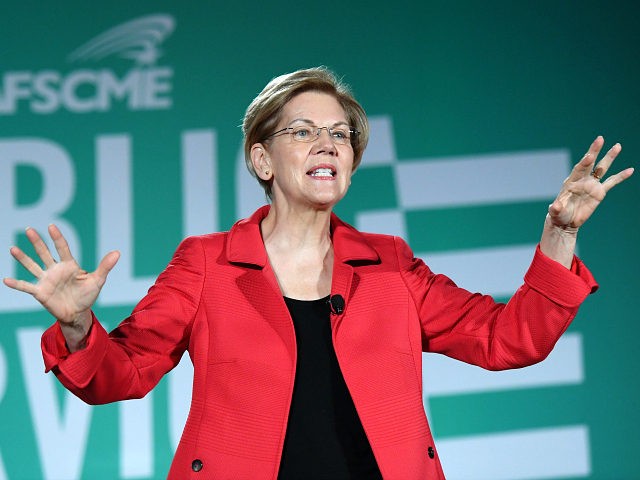 Sen. Elizabeth Warren (D-MA) called for health care that is high-quality, affordable, and “gender-affirming” in a tweet posted Tuesday afternoon. However, she has not always held that position.

Warren tweeted Tuesday that Americans are entitled to “high-quality, affordable, gender-affirming health care” and criticized the Trump administration for considering a proposal that would revise Obama-era protections for transgender adults, who make up 0.6 percent of the U.S. population, according to government data.

“But the Trump administration is trying to roll back important protections for trans Americans. Help fight back by leaving a comment for HHS in protest,” she added, along with a link to a Protect Trans Health petition:

Everyone should be able to access high-quality, affordable, gender-affirming health care. But the Trump administration is trying to roll back important protections for trans Americans. Help fight back by leaving a comment for HHS in protest: https://t.co/pKDcOqbsc7

The Trump-Pence Administration is trying to undermine the Health Care Rights Law, a lifesaving law that helps transgender people access the health care they need without discrimination from health care providers or insurers. Now, the Department of Health and Human Services is proposing a regulation that falsely says discrimination against transgender people is legal.

Department of Health and Human Services (HHS) released the following proposal in June:

The Department of Health and Human Services (“the Department”) is committed to ensuring the civil rights of all individuals who access or seek to access health programs or activities of covered entities under Section 1557 of the Patient Protection and Affordable Care Act. The Department proposes to revise its Section 1557 regulation in order to better comply with the mandates of Congress, address legal concerns, relieve billions of dollars in undue regulatory burdens, further substantive compliance, reduce confusion, and clarify the scope of Section 1557 in keeping with pre-existing civil rights statutes and regulations prohibiting discrimination on the basis of race, color, national origin, sex, age, and disability.

HHS contends that the rule would “empower the Department to continue its robust enforcement of civil rights laws prohibiting discrimination on the basis of race, color, national origin, sex, age, or disability in Department-funded health programs or activities, and would make it clear that such civil rights laws remain in full force and effect.”

Critics consider the proposal a direct assault on the transgender community.

This section covers discrimination on the basis of gender identity, but the Trump-Pence White House has needlessly proposed a new regulation that would cruelly strip the ACA of specific protections for LGBTQ patients, specifically transgender people. This proposed regulation callously puts lives at risk, and it’s imperative the American people make their voices heard on why this it is dangerous and unacceptable.

On June 14, the Department of Health and Human Services (HHS) published a proposed regulation based on a court’s outrageous claim that the ACA’s protection against discrimination on the basis of gender identity is “likely unlawful.” This initiated a 60-day public comment period that runs through Aug. 12. In a press release sent out by HHS, Roger Severino, the Director of the department’s Office of Civil Rights, offered this ratonale: “When Congress prohibited sex discrimination, it did so according to the plain meaning of the term, and we are making our regulations conform.”

While Warren has been attempting to brand herself as a strong transgender ally, she has expressed concerns in regards to taxpayer-funded services for transgender individuals in the past. She openly admitted that taxpayer-funded reassignment surgery for convicted murderer Robert Kosilek, who switched to “Michelle,” would be a bad use of taxpayer dollars.

Kosilek, who long battled the prison system for sexual reassignment surgery, sued the Massachusetts prison system for failing to allow him to receive the “gender-affirming” health care Warren purportedly supports. A federal judge sided with Kosilek in 2012, during Warren’s battle with former Sen. Scott Brown (R-MA).

“I have to say, I don’t think it’s a good use of taxpayer dollars,” Warren said when asked about the ruling at the time.

Warren eventually walked that position back, with her then-presidential exploratory committee telling ThinkProgress in January that she “supports access to medically necessary services, including transition-related surgeries.”

“This includes procedures taking place at the VA, in the military, or at correctional facilities,” the statement added.