When the West’s leading media organizations attempt to convince audiences they know nothing about where Mohammed Aly – a Spanish-based Egyptian protest leader – came from, the first thing one can be sure of is they are being lied to.

Protests have begun to spread again in Egypt after nearly a decade of frustration in Washington over its inability to coerce Cairo into serving its regional and global designs. Protesters have allegedly been stirred up by economic turmoil still plaguing Egypt, however familiar US-backed organizations used in the past to destabilize Egypt are turning up at the center of protest venues including the Muslim Brotherhood which has served a pivotal role in other regional US projects including filling the ranks of militant forces fighting the government in Syria.

The Western media’s feigned ignorance over self-proclaimed protest leader Mohammed Aly is meant to obfuscate his political ties and those of the organizations and enterprises he is associated with.

The New York Times in its article, “Egypt Protests Came as a Total Shock. The Man Behind Them Is Just as Surprising,” claims:

Under the government of President Abdel Fattah el-Sisi of Egypt, so little dissent is allowed — and what little there is comes at such a high price — that when just a few hundred people across the country called for Mr. el-Sisi’s ouster in a burst of scattered protests on Friday night, it came as a shock.

The apparent trigger for the demonstrations was almost as unexpected: Mohamed Ali, a 45-year-old construction contractor and part-time actor who says he got rich building projects for the Egyptian military and then left for Spain to live in self-imposed exile, where he began posting videos on social media accusing Mr. el-Sisi of corruption and hypocrisy.

“It is sort of odd,” said Amy Hawthorne, the deputy director for research at the Project on Middle East Democracy. “Who is this person, who is he connected to, what led him to come out with these allegations now? Obviously he’s very well connected, but who exactly are his connections?”

No mention is made by the New York Times regarding the Project on Middle Eastern Democracy (POMED) –  a Washington DC-based front funded by the US National Endowment for Democracy (NED) which served as a propaganda nexus during the 2011 US-fuelled “Arab Spring” and is again promoting rhetoric to support ongoing protests in Egypt today.

POMED fails to disclose its funding and associations on its own website, but NED in a 2017 “Grantee Spotlight” titled, “BRAINSTORMING FOR DEMOCRACY IN THE MENA REGION,” reveals:

That the deputy director of POMED – funded by NED – is unaware of who Mohammed Aly is and the US government-funded networks he is associated with is difficult to believe.

Who is Mohammed Aly?

Aly claims to be an Egyptian contractor turned ‘whistleblower’ after witnessing government corruption – but reports indicate he was only part of a family-owned contracting firm led by his father who has denounced him and his “activism.”

The BBC in its article, “Mohamed Ali: The self-exiled Egyptian sparking protests at home,” would report:

His father, Ali Abdul Khalek, was a national weightlifting champion before he launched his family contracting businesses for himself and his sons, including Mohamed.

In an interview with pro-government TV presenter Ahmed Moussa, Abdul Khalek appeared to disown his son and sought to discredit his allegations, saying his family owed their fortunes to the armed forces.

Of Aly himself – the BBC would note:

He is also known for having briefly pursued a career as an actor – with credits including the little-known, but somewhat acclaimed film The Other Land – before liquidating his assets and moving to Spain.

Not mentioned is that “The Other Land” was jointly-produced and filmed in Spain. Involved in marketing the film was MAD Solutions – a firm linked to USAID, US-European government-funded nongovernmental organizations, Western media such as Forbes, as well as Arab production companies across the MENA region.

Among MAD’s partners includes the Ana Hunna Network – a German-based front posing as women’s rights advocates. The network is in turn made up of various US-European funded fronts including USAID-funded International Development Support and Consulting (IDSC).

MAD is also partnered with the Arab language satellite TV channel Alhurra which is based in the US and is funded directly by the US government (Arabic) via the US Agency for Global Media (USAGM), formerly the Broadcasting Board of Governors (BBG).

While documented evidence of Mohammed Aly working directly for the US government or its allies in the Middle East is still forthcoming – it surely is no coincidence that he has become a “sudden” and “unexpected leader” of protests aimed at coercing Egypt back on a pro-Western footing, promoted by the Western media all while his obvious ties to agents of US influence are being covered up by those very agents themselves.

Aly’s role in a politically-charged film produced and promoted by pro-Western fronts – and a film jointly produced and filmed in Spain – is also no coincidence. The ties and networks that led him through that process are now hosting him as he begins his next performance as an influential protest leader. 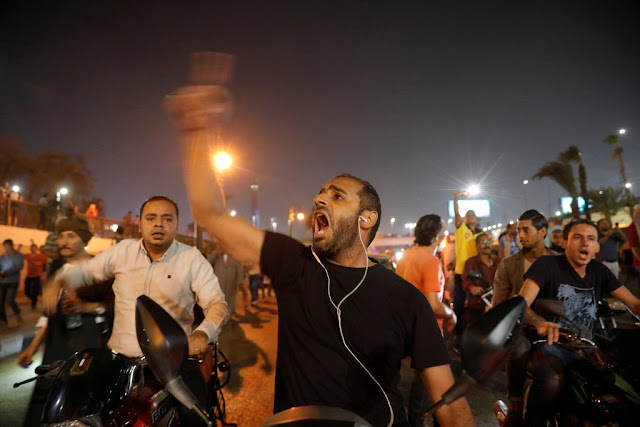 While it is clear he is but the public face of a much more sinister effort by the militant and extremist Muslim Brotherhood to fill Egypt’s streets with growing chaos – the Western media has gone through great efforts to deny this.

DW – for example – in its article, “Muslim Brotherhood or el-Sissi rivals: Who is behind Egypt’s protests?,” would attempt to claim:

Once a major player in the 2011 revolution, the MB has since been labeled a “terror organization” by el-Sissi’s government, but observers say the allegations are a deflection as the organization is a spent force.

“There’s very little or no indication that the Brotherhood within Egypt has any sort of capability to organize on such a scale,” David Butter, an associate fellow at Chatham House, told DW.

“Social media activists from outside Egypt who applauded the action might be trying to take some credit, but nothing suggests the Brothers have any involvement at all,” Butter said.

The Muslim Brotherhood is a massive region-wide organization complete with political parties, armed wings, and of course immense state-sponsorship including from the United States, Western Europe, and the West’s partners particularly in the Persian Gulf and Turkey.

If the Muslim Brotherhood lacks “any sort of capability to organize on such a scale” inside of Egypt, who has more capability to do so?

The DW article suggests there may be a rift within Egypt’s ruling elite – but no evidence, names or even a theory is put forth as to who among Egypt’s elite might be involved or why.

US-Turkish-Saudi nominee – Mohamed Morsi – rose to power and immediately set out to transform the large North African nation into an obedient servant of Western interests.

This included severing ties between Egypt and the Syrian government of President Bashar al-Assad while arming, funding, and recruiting militants being funnelled onto the battlefield within Syria itself.

Egyptian President Mohamed Morsi said he had cut all diplomatic ties with Damascus on Saturday and backed a no-fly zone over Syria, pitching the most populous Arab state more firmly against President Bashar al-Assad.

Addressing a rally called by Sunni Muslim clerics in Cairo, the Sunni Islamist head of state also warned Assad’s ally, the Iranian-backed Lebanese Shi’ite militia Hezbollah, to pull back from fighting in Syria.

Commentators have cited Egypt’s role in the US-led war in Yemen as evidence that el-Sisi’s government also serves US interests – but it should be noted that Egypt’s commitments were symbolic, short-lived, and a result of paying back Persian Gulf monarchies who financially bailed out Egypt’s flagging economy in the wake of 2011’s instability.

For a nation like Egypt whose foreign policy, economic ties, and relations have straddled East and West for decades, “choosing sides” is not a simple matter.

Egypt’s fragile economic, social, and political balance has been repeatedly targeted by Western interests both directly and through militant proxies armed and backed by Persian Gulf states following attempts by Cairo to rebuild ties with Russia or to build closer ties with China.

The presence of the so-called “Islamic State” – the same militant force serving as proxies in Washington’s war on Syria – in Egypt’s Sinai region serves as a constant source of pressure attempting to coerce Cairo to pivot Westward.

Recent protests are also aimed at adding to this pressure.

As to why Egypt is facing such pressure now – we need only look at Washington’s recent escalation with Iran. Egypt under Morsi sought to weaken Syria as part of Washington’s wider conflict with Iran. Efforts to coerce Egypt into joining the US-led war in Yemen was also aimed at eliminating Iranian allies and further isolating Iran itself.

Key to any US foreign policy victory over Iran will be the creation of a regional, united front against Tehran – with nations – willingly or not – enlisted to play a role however small in isolating and undermining Iranian stability internally, regionally, and globally.

Should protests pick up sufficient momentum in Egypt – the prospect of Washington introducing demands in exchange for momentary relief from street violence will undoubtedly follow.

In the days and weeks ahead – Egypt’s ability or inability to contain the protests and resist US efforts to drag Cairo into another round of regional violence and instability – will in turn help indicate the wider prospects of peace or war in the region as Washington struggles to reassert itself at any cost.

***
Author Tony Cartalucci, Bangkok-based geopolitical researcher, writer and special contributor to 21st Century Wire. Over the last decade, his work has been published on a number of popular news and analysis websites, and also on the online magazine “New Eastern Outlook”.