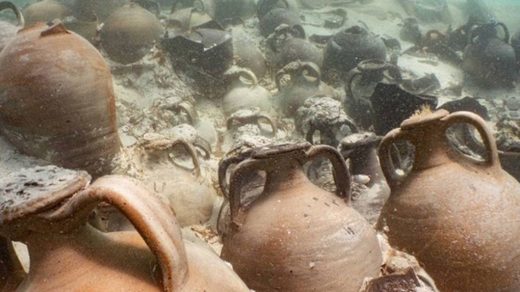 The Roman delicacies spent 1,800 years on the bottom of the Mediterranean to become a true ‘feast’ for the archeologists, who said that they’ve stumbled upon one of the best preserved shipwrecks from the period.

The Balearic Institute of Maritime Archeology Studies posted a video that pictured the ship and its artifacts, as well as the complex job done by the divers to recover them from the deep.

“This wreck is one of the best preserved in the entire Mediterranean of the lower Roman Empire,” the Department of Culture of Mallorca said.

The small cargo vessel apparently sank near the island of Mallorca sometime in the 3rd Century CE, as it was sailing from southern Iberia – which is now part of modern Spain – to Rome.

Scientists who made the discovery believe the ship remained almost interact because it ran aground and filled with water very quickly. If it had been caught in a storm, the debris from the ship and its cargo would’ve been scattered in all directions.

There were 93 perfectly-sealed earthenware amphorae stored in the ship’s hull. The jugs with two handles and a narrow neck, traditionally used by the Greeks and Romans, contained a real culinary treasure as they were filled with wine, olive oil and garum, which would be easiest to describe as ancient ketchup.

Made from fermented fish guts and tomatoes, garum was one of the most popular sauces in the Rome and was added to most dishes. The delicacy was produced in Spain in large quantities and shipped to the capital and other parts of the Empire.

But the recipe wasn’t risk-free, as some studies blame the sauce for many ancient Romans being infected with fish tapeworms. It is unlikely that the scientists, who are now cataloguing and studying the retrieved jars, will be tasting what’s inside them.