International Man: You have sounded the alarm on a coming financial crisis of historic proportions. How do Trump’s trade policies figure into your view that a crisis is coming? 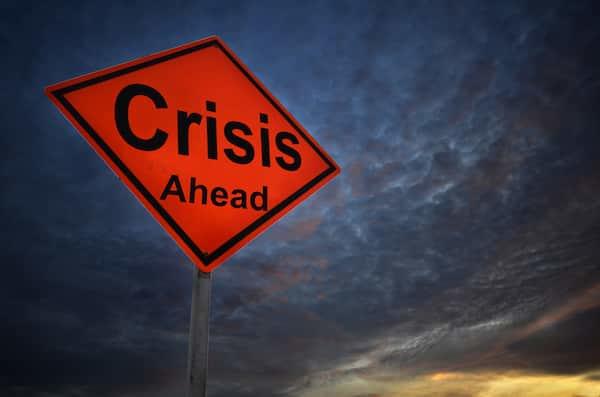 David Stockman: Trump’s trade policies only create more risk and rot down below.

They’re just kicking the can down the road. With this latest move by the Fed, they have cut the interest rates three times and short-term rates are back at 1.55%. They’re pumping their balance sheet back up—it’s up $300 billion just since September.

The Fed has reverted to all of the things that have created the underlying rot—and that means when finally things break loose, it’s going to be far worse than it would have otherwise been.

Given that they’re kicking the can down the road, they’re building the pressure in the system to really explosive levels.

The trade chaos that Trump’s creating is probably the catalyst that will bring down the whole house of cards.

At end of the day, it’s about the Red Ponzi. The world economy would be not nearly as good as it looks had the Chinese not been borrowing like there’s no tomorrow and building regardless of whether its efficient or profitable.

This has kept the global economy inching forward on a totally artificial basis. You could track it; some people call it the “China credit impulse.” Every time they get into trouble, they turn on the printing press. That causes commodity prices to rise and industrial activity and trade to pick up. It shows up in the GDP numbers, and then everybody gets all excited.

The fear of recession that we had a while back has now abated. We’re back to another global reflation meme, but none of this is sustainable.

And yet that’s what has happened about three times since 2011. Each time, we have to remember the rulers in Beijing are digging themselves deeper into the hole. They’ve got an economy now that they claim is worth $13 trillion of GDP, but it’s got $40 trillion of debt on it. That’s just bank debt! I’m not even talking about the other forms of debt, such as trade debt, bond debt, so on and so forth.

It’s like nothing we’ve ever seen before. People should be fearful that this tower of debt is visibly wavering, as China is getting clobbered by Trump’s trade war.

Recently, exports to the United States were down 23% from the prior year.

Nothing like this has happened in a decade or longer. China’s investment in fixed assets, which has kept their whole economy going, is slowly grinding to a halt. The leaders there are desperately trying to keep the whole Ponzi going. That’s the heart of the risk.

Yet Trump is going right at it because of his primitive view that everybody else cheats and we have to teach China a lesson.

It was the dumb central bankers who didn’t know what they were doing and that basically created a global financial system that won’t correct these huge imbalances in capital and trade flows. It’s leading to a point of unsustainability and eventual crisis.

Whether President Trump knows it or not, in the guise of pursuit of MAGA [Make America Great Again], he is shaking the Red Ponzi to the core, and I think it’s very fragile.

The whole global economy is really dependent on China piling even more debt onto the $40 trillion pile they already have. Trump’s trade war is basically an economic cruise missile barrage aimed right at that gargantuan pile of unsupportable debt.

Therefore, I think there are very troubling times ahead.

International Man: What developments do you expect in 2020 that could lead to a crisis?

David Stockman: They’re all interrelated. How many times does the stock market rally because there was some type of TV headline about a trade deal? In fact, there is one every other day.

It’s going to become damn clear that there’s no fundamental trade deal, just an unstable truce. It’s going to become apparent that there is an ongoing deep, destructive war, not just on trade, but on technology, the whole military-political spectrum that has been unleashed and exacerbated by Trump’s trade policies.

It has very negative implications for the future—economically and otherwise.

The so-called “phase one” deal doesn’t amount to a hill of beans.

The $50 billion of farm exports, for example, is a complete pipe dream. But say China is going to buy $25 billion of our products by 2021. That’s where we started four years ago, and it’s way below the all-time peak of $28 billion back in 2013.

How’s that a deal?

All the other issues have been deferred.

China says they won’t manipulate their currency. But everybody in the world manipulates their fiat currency, and central banks are constantly doing that.

If this flimsy phase one deal actually gets signed, it’ll become evident to the market and the robo traders that this isn’t the end of a threat to future prosperity. It’s just a sign that this is going to be ongoing and will get bigger and more disruptive as time goes on.

They may get what they wish, which is a trade deal. That deal will only crystallize the fact that we’re in a world that’s coming apart at the seams, in terms of the global trading system and financial and capital flows.

International Man: What is your view on the future of the US dollar? Does that outlook change depending on the results of the 2020 election?

David Stockman: Trump is simply demanding that the Fed become more aggressive in the race to the bottom.

People don’t know, in historic times—and by that I mean anything before 1990—the balance sheets of central banks tended to be 2–4% of GDP. Now we’re in a totally different world.

If the US wants to compete with the BOJ [Bank of Japan] or the ECB or the people’s printing press of China, then go ahead, but you’ll never win. It’s a race to the bottom.

That is the real issue.

Fiat currencies are heading for a demise, because they’re based on principles and predicates that are, one, stupid, and, two, unsustainable over a long period of time.

We’re soon going to find that out.

International Man: What are your views on gold’s future in the international monetary system?

David Stockman: Gold is the enemy of the state.

Central banks are creatures of the state. They are agents, instruments of Leviathan.

Leviathan will fight—to the bitter end—any increase in gold’s role in the global economy or monetary system.

It will materialize only if there is a complete existential crisis and the whole central banking system breaks down and the world has to put itself back together.

Some people will recognize that one element of the reset and revamping needs to be the anchor that kept the monetary system stable for several centuries before 1971—which is gold.

That is a possibility, but how do you get from here to there?

The answer is a devastating crisis that is so powerful and destructive that the philosophy that drives everything today is completely discredited.

That’s pretty severe. It’s a valley of death that you don’t necessarily want to hazard, but it’s the only way to get from here to sound money, unfortunately.

International Man: The central banks of China, Russia, Turkey, and several European countries are buying massive amounts of gold. What do you think this means?

I think that intelligent people can see that this system of balance sheet expansion and interest rate repression—and $17 trillion in bonds trading with sub-zero yields a few months ago—isn’t sustainable.

Some central banks at least are trying to hedge their bets by reallocating their balance sheet to have a larger share of gold. As the crisis of what I call “Keynesian central banking” becomes more and more intensive and acute, more central banks will be buying gold.

If central banks begin to really stock up on gold, what’s going to happen is people will try to front run them.

In other words, the world is awash with massive artificial liquidity created by the central banks. It’s in the hands of traders, who move in split-second intervals and attempt to leverage anything that looks like it’s going up. Especially if they can put it on leverage that costs nothing.

Unfortunately most people have no idea what really happens when a government goes out of control, let alone how to prepare… The coming economic and political crisis is going to be much worse, much longer, and very different than what we’ve seen in the past. That’s exactly why New York Times best-selling author Doug Casey and his team just released an urgent new PDF report that explains what could come next and what you can do about it. Click here to download it now.