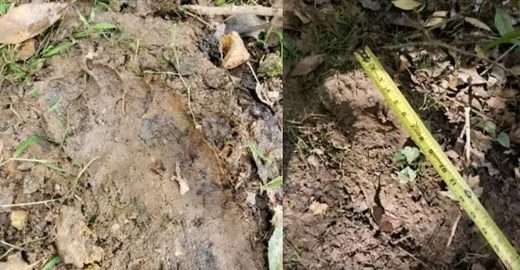 An electrician in North Carolina recently stumbled upon a series of sizeable prints that left him wondering if they may have been created by Bigfoot. According to a local media report, the remarkable discovery occurred as Joe Scarborough was working on a job at a residence in the town of Casar and he noticed the odd tracks outside the home. The bewildered observer initially suspected that perhaps the large prints had come from a human, marveling to himself that “somebody’s got a big foot.”

However, when Scarborough looked closer at the tracks, he was struck by the sheer size of the impressions, noting that they seemed to measure thirteen or fourteen inches long. To his credit, the quick-thinking electrician went back to his truck and grabbed a tape measure so that he could properly document the strange find. Based on how some small plants were intermingled with the prints, Scarborough surmised that the tracks were relatively fresh.

Remarkably, it would seem that the discovery has turned Scarborough into something of a Bigfoot hunter as he now plans to return to the residence to investigate the matter further. “I’m going to spend the night,” he revealed, “I’m going to take some game cameras and see what happens. I mean, why not?” While it would seem that Scarborough is hoping that the prints really did come from a Bigfoot, he conceded that there may be some shenanigans as play, musing that “you don’t know how many hoaxes are out there.”

Scarborough’s possible Sasquatch prints are yet another in what has become a spate of North Carolina Bigfoot cases that have made the news in recent weeks, including a pair of potential photos of the creature as well as a woman who believed that the famed cryptid had been lurking in her backyard. Taken together, one might almost say that there is some kind of flap unfolding in the state. Setting that matter aside for the moment, what’s your take on Scarborough’s discovery? Weigh in with your thoughts at the Coast to Coast AM Facebook page.

Tim Binnall is the news editor for the Coast to Coast AM website as well as the host of the pioneering paranormal podcast Binnall of America. For more than a decade and over the course of hundreds of BoA programs, he has interviewed a vast array of researchers, spanning a wide spectrum of paranormal genres and ranging from bonafide esoteric icons to up-and-coming future players in ‘the field.’ A graduate of Syracuse University, Binnall aims to maintain an outsider’s perspective on the paranormal world with a distinct appreciation for its absurdities and a keen interest in the personalities and sociology of esoteric studies.