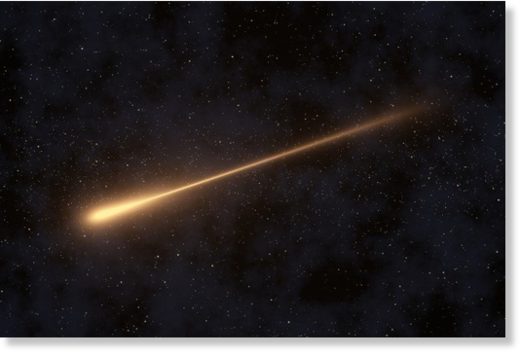 Observant stargazers in the Pacific Northwest noticed something streak across the night sky late Sunday night, with a long, blue-green tail and an accompanying booming sound.

Posts in Reddit forums started popping up: “I saw what looked like a strange firework …”Did anyone else see a shooting star tonight?” “What was that huge explosion sound north Seattle????”

The awe wasn’t confined to the Seattle area. A Reddit user in Vancouver, B.C., reported seeing “a relatively large streak of light cut diagonally across the sky tonight around 11:30 p.m. We’re in the Dunbar and 16th area and saw it in a north-northwest direction, about 30 degrees up. I thought it was just white, my girlfriend said it was rainbow coloured. Are there any meteor showers or something tonight? It lasted about three-quarters of a second, and sort of faded quickly.”

Mike Hankey of the American Meteor Society confirmed that it was, indeed, a meteor. The organization received about 30 reports of the sighting on Sunday night, Hankey said.

Multiple meteor showers are active at the moment, the most notable being the Taurids, Hankey said. Two Taurid radiant meteor showers and the Leonids meteor shower will keep skies active this month, according to an article on the society’s website by Robert Lunsford.

“The addition of strong sporadic rates make November one of the better months to view meteor activity from north of the equator,” Lunsford wrote of meteor activity in the first week of the month.

But what of that booming sound?

Hankey said that usually indicates that the meteor “penetrated deep enough into the atmosphere to create a sonic boom. This means the underlying mass is larger than a typical meteor.”

It’s possible the meteor people saw was big enough to be classified as a “fireball,” said Woody Sullivan, a physicist, astronomer and University of Washington professor emeritus. Sullivan is known for his work in astrobiology, galactic and extragalactic astronomy, gnomonics, and the search for extraterrestrial intelligence.

“Large, bright meteors (called ‘fireballs’) can sometimes make an audible sound as they whiz through the atmosphere at a very high speed and burn and break up,” Sullivan said in an email Monday morning.