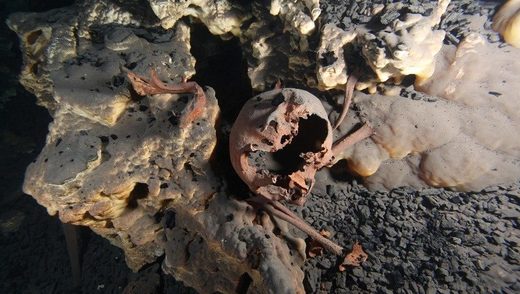 © Jerónimo Avilés
Skeletal remains found inside a submerged cave in Mexico are among the oldest found in the Americas.

The discovery adds fresh fuel to one of the most hotly debated topics in archaeology and biological anthropology, according to a paper published in the journal PLOS ONE, as part of a quest to understand the origins of Native Americans.

The skeletons, discovered by underwater archaeologists in the expansive limestone cave system that used to be above sea level, are dated to between 13 and nine thousand years ago, during the late Pleistocene/early Holocene.

This places them among the oldest human remains in the Americas, thus representing some of the first human dwellers on the continent, says first author Mark Hubbe from Ohio State University in the US.

The discovery contrasts with South American remains that are quite homogenous, and winds the clock further back on reports of highly diverse craniofacial skeletons that represent late Holocene Mexican groups.

“These finds open the possibility that the initial populations of North America already had a high level of morphological diversity, which was reduced as populations dispersed into the southern continent,” says Hubbe.

The four skulls, discovered between 2008 and 2015, were analysed with CT scans, combining information from several X-rays to create 3D images of the skulls.

The researchers compared the craniofacial features with early collections in South America and reference collections from around the world to identify those they most resembled.

The third’s features corresponded with Asian and Native American groups, and the fourth had affinities with arctic populations along with some modern South American features.

There is still much to learn, as fewer than 20 skeletons have been unearthed in North America, compared to 300 to 400 on the southern continent.

But the remains add an important piece to the puzzle of early North American populations, challenging simplified models depicting human migration and settlement of the Americas.

“We always assumed that what was happening in South America was true in North America,” says Hubbe. “Now we need to revise that.”

“The study of these rare remains illustrates that we are probably still underestimating the biological diversity of early Americans and suggests that the process of human occupation of North and South America was much more complex than previously thought.”