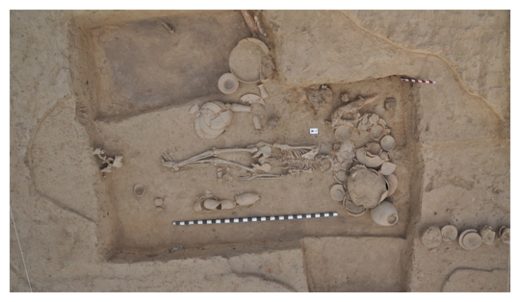 A massive study of ancient and modern genomes stretching from Europe to Central and South Asia and spanning the last 8000 years paints a complex picture of prehistoric human migrations.

The study, a herculean undertaking published in the journal Science and led by Vagheesh Narasimhan and colleagues at the Harvard Medical School, involved sequencing genomes from more than 500 new ancient individuals – more than any other ancient DNA study to date.

It drew together detailed information gleaned not only from ancient and modern genomes, but also from archaeology and linguistics – a “three-layered cake”, as Narasimhan describes it – to understand how ancient groups interacted. Precise radiocarbon ages for 269 ancient remains also were determined.

The narrative that emerges is a complicated one, but it sheds light on an enduring mystery of the Neolithic period: whether languages and innovations such as farming spread from one place to the next.

“These are the most profound cultural transformations to occur in the past 10,000 years,” says Narasimhan.

After the advent of farming around 7000 BCE, populations in the north and south intermixed and five new genetic gradients formed.

Genomic information from a handful of individuals just outside of South Asia have a mix of ancestry from Iranian farmers and the Andaman Islands south of India.

The team concurrently published a detailed analysis of a member of the Indus Valley Civilisation in the journal Cell.

“The genetic ancestry of that individual is a source population for later populations that we observe [in South Asia] today,” says Narasimhan.

The Iranian ancestry traces to pre-farming communities. This suggests that farming in South Asia wasn’t brought to the region directly from farming migrants from the Fertile Crescent.

It could have arisen independently in the region or come via a more circuitous route and exchange of ideas over time.

During the Bronze Age, Yamnaya herders from the flat grasslands of the Eurasian Steppe in Central Asia spread throughout Europe and South Asia.

The spread of Yamnaya ancestry as far west as Spain, east into Siberia and south into northern South Asia fits with this group of herders having introduced Indo-European languages to all of these regions, independently of farming.

“In a time in which we’re discussing immigration and various other topics in the news, it’s worth keeping in mind that the movement of people is something that has happened through all times in human history,” says Narasimhan.

Palaeogeneticist Bastien Llamas from the University of Adelaide, Australia, who was not involved in the study, applauds the “massive undertaking” for its scope as well as its technical prowess.

“How great is that to have a very detailed picture across such a large geographical area?” he says. “There are going to be a lot of people working now on these datasets to answer more regional questions.”