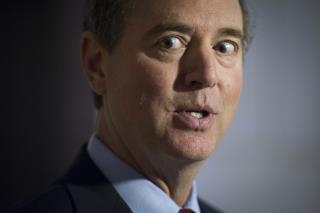 I’m an over-the-road truck driver.  That means I have lots of time to indulge myself in activities not given to ordinary mortals, such as listening gavel-to-gavel to the Senate’s impeachment process (still in progress as of this writing).  Most ordinary mortals do not enjoy (?) this luxury, because they have lives of their own: things like home, family, hobbies, jobs that don’t permit radio or TV listening.  But me, I’m a captive audience in my truck, so if I feel like listening, then listening is what I do.  It makes the miles go by.

In the course of my tuning in to the feed from the impeachment hearings, I caught House manager Congressman Adam Schiff telling a huge whopper: that he doesn’t know who the “whistleblower” is.  That is the individual whose machinations and contacts with Schiff’s Intelligence Committee touched off the entire impeachment business.  Schiff is asserting that he still, to this day, does not know who this individual is.

This is a lie.  There is no way that Schiff cannot have known exactly who the “whistleblower” is, and have known it for nearly three years now.  In Schiff’s case, it is only the latest in a career of lies, which is well documented.  A partial litany would include the contradictory stories he has told about his office’s contacts with the “whistleblower,” his claims to have conclusive evidence proving that Donald Trump colluded with the Russians (which were blown apart by the Muller Report), and his claim that the FBI didn’t use the absurd Steele Dossier as its justification to the FISA Court to surveil Carter Page.

This time, Schiff raised his lies to a whole new level, by repeating his lie inside the halls of Congress.  And he did it not once, but three times: once in his own Intelligence Committee and at least twice to the Senate during the question-and-answer phase.

Schiff’s assertion isn’t perjury, since Schiff wasn’t under oath when he made these declarations.  But since he repeated these lies in the halls of Congress, and in the most solemn setting possible, it is the next thing to it.  It is a lie that was made at the very highest levels of state.

Something similar happened in the United Kingdom in 1963: the Profumo Affair.

John Profumo was secretary of state for war in the Conservative Government of Prime Minister Harold MacMillan.  In 1961, he ran afoul of a British showgirl and presumable prostitute, Christine Keeler, embarking on an affair with her lasting a few months.  Keeler was also the mistress of a British osteopath and of the senior Soviet naval attaché, which compromised Profumo.

When questioned about the affair in the House of Commons, Profumo disgraced himself by lying about it in that he denied the affair.  Unheard of!  In Britain, lying to Parliament is considered to be one of the worst crimes a person can commit.  When Profumo was caught, he had to leave Her Majesty’s Government in disgrace, in 1963.  The blowback led to the downfall of the MacMillan government and its replacement by the Labor Government of Harold Wilson in 1964.

What will be the effects of Schiff’s own history of lies?  There are reports that he wants to run for the Senate after Dianne Feinstein enters into her own long overdue retirement in 2024.  Perhaps he views his management of the impeachment affair as his audition for the Senate run to succeed her?  Maybe he wants to run for president?  Bill Clinton and Lyndon Johnson pulled it off, starting with a lot less.

One thing that seems certain is that however Schiff’s life turns out, he won’t follow the path that Profumo took.  That is because Profumo chose a totally different life for himself, something inconceivable for Schiff: that of atonement.  He took a job as a janitor in a soup kitchen.  Eventually and in the course of time, showing the same abilities that had enabled him to rise high in Her Majesty’s Government, he ended up running the place.  After a number of years doing that, he became its chief fundraiser.  In 1975, he received a knighthood from Queen Elizabeth for his prodigious work in raising money for charities.  He did all this work as a volunteer, since he was able to subsist off inherited wealth.  One could say John Profumo found redemption and atonement.

Schiff, in contrast, will suffer the same fate liars usually do: his life will end in bitterness and perhaps insanity.  That’s because it is difficult to be a successful liar; only geniuses can pull it off.

How difficult it is to be a successful liar!  The liar, to be successful, has to keep straight in his own mind all the variations and permutations of every lie he ever told.  He can’t remember all the versions he told, and eventually, he can’t tell the differences anymore.  This road leads to unreality and surreality, and eventually insanity.  By contrast, the truth-teller has to keep only one version straight in his own mind: the truthful one.  It makes for an easier life.

However Adam Schiff’s political ambitions turn out, a liar’s fate is the one he has chosen for himself.